I had previously written about Der König in Thule, both Goethe’s poem and Franz Schubert’s musical adaption. That got me going, clicking around the Internet on songs written by Schubert, and I stumbled across this little gem that I had all but forgotten about since high school.

Goethe’s Erlkönig (Elf-King), composed in 1782, is probably his most famous ballad.  Like Der König in Thule, it too was adapted to music by Franz Schubert (c. 1815). I probably read this poem at least a dozen times in high school — in fact I probably had to memorize it in high school. I have to admit, though, it always creeped me out a bit and I never really understood it. 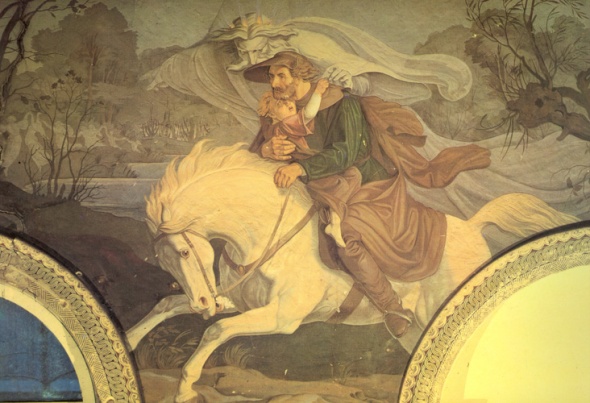 The German original is due to Goethe, the English translation to Edgar Alfred Bowring:

Reading it now as an adult, I’m struck by how similar the account given by Goethe is to modern reports of missing persons from all around the United States. There is, across the entire world, a phenomenon of young children who suddenly disappear, or die, while out in the wilderness. These aren’t children who wander off and get “lost”, rather they’re often in the immediate presence of their parents or guardians at the time of disappearance or death — just like in Goethe’s story. Even Goethe’s account of strange lights and mists appearing in the forest are consistent with modern reports of missing children.

David Paulides, a former San Jose, California police officer, has investigated a number of these unexplained disappearances in U.S. national parks. To date, he has written eight books on the subject and, along with his son Benjamin, has produced a documentary film on the subject entitled Missing 411:

Wes Germer, the host of Sasquatch Chronicles, has likewise seen and reported on these strange “fairy” lights that appear deep in the woods at night:

Returning back to Schubert’s adaption of Goethe’s ballad, I found this clip on YouTube:

The first time I saw this clip I was a little put-off by the animation, which I thought was a bit jarring, but it’s grown on me after watching it a couple times. I agree with the commenters who say the boy should have been depicted as sitting in front of the father, in his lap, and looking backwards over his shoulder. Otherwise a great performance!

Ironically, Johann Gottfried Herder, Goethe’s good friend whom we met in the last post on Thule, also makes a cameo appearance here. It was Herder’s translation of the Danish original  that inspired Goethe to write his version of Erlkönig. Herder’s poem is named Erlkönigs Tochter (Elf-King’s Daughter) and is closer to the Danish version than what Goethe wrote.

Herder’s plotline seems to have been quite popular in Nordic folklore during the Middle Ages, with similar variants appearing throughout what are now Denmark, Norway, Sweden and Iceland. In the Herder/Danish version, the hero of the story is a knight named Sir Olaf who is mortally wounded by a jealous elf-princess after he spurns her love.

In addition to these adaptions, several prominent composers have made original attempts to set Goethe’s Erlkönig to music:

It’s also worth noting here that Mendelssohn once told Goethe that Erlkönig could never be successfully set to music — he believed the task of musically depicting a spiritual Elf-King to be too difficult.

Nothing to do with Central European history per se, but if you like cryptids you may enjoy the following podcasts:

In addition to these, I would also include anything written by author David Paulides, who writes about strange and unexplained disappearances in U.S. national parks. His books can be purchased at CanAmMissing.com.